A little while ago we joined a hackathon put together by Telenor Digital, as part of their Digital Winners conference. And in case you didn’t know, a hackathon is an intense collaboration trying to make tangible results in a short time, often between different people from other teams and companies.

The goal was to find a problem and come up with a solution within 48 hours. If not perfect, the solution would hopefully demonstrate how technology could help solve the problem. 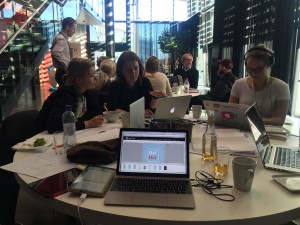 Our team consisted of Cecilie Liset & Kamilla, service design students at Arkitekthøyskolen in Oslo, Colin Dodd & Ingrid Ødegaard from the video chat service appear.in  and of course our own Sondre Bjørnebekk, founder of TapBookAuthor.com.

Since Norway and many other countries are destinations for a great number of refugees these days, we decided to let our task focus on newly arrived refugees by giving them a simple tool for learning basic language skills.

To kickstart our research we made contact with the managers of the Facebook group Refugees welcome to Norway. They put us together with Ahmad, a high school student who agreed to do a quick video interview with us in appear.in.

We also spoke to people from the Red Cross who work with welcoming refugees on a daily basis, as well as guiding them in their new home town. We should probably have done more research, but the time aspect is unfortunately a part of the game when it comes to a hackathon.

Anyway we asked Ahmad a load of questions to get closer to a possible solution. Here are a couple of them:

Based on our own research and Ahmad´s response we kept working on our idea, finding an app to be a good solution. Then Kamilla and Cecilie sketched out the journey from when a refugee arrives, until he/she starts learning the language, finally showing how our app could fit into this. Check it out here: https://vimeo.com/143230111

We decided to use TapBookAuthor’s own technology to make the actual app, and started to make a skeleton for a book. The book-app would first take the learner through a few language lessons, before a quiz would check out how much was learned. Finally the learner could use the appear.in video chat room inside the book, and chat with another learner who also wants to practice. In this way learning becomes both fun and interactive, in addition to having a social aspect.

To promote the idea we thought of informing about the app with posters in areas that refugees have go through when they arrive. We also made a simple webpage prototype for this purpose. The idea was simply to show how a solution like this could work, so we didn’t actually make real content for the language lessons. But we really hope that someone who works with educational material might be interested in picking up this idea and put it into life!

We believe that there could be some quick rewards for everybody by making it easier for newly arrived refugees to start learning Norwegian in this way. And if you have the content – we have the technology!

Oh, and one more thing:

In addition to the group creating the prototype of the language app for refugees, team member Colin Dodd created his own small interactive picture book in just a few hours. During a demonstration of it the book asked him for a few details, including his phone number. Unfortunately Colin lost contact with his robot. But a bit later, after flipping a few pages, his phone started calling, and it spoke to him in a somewhat metallic voice?! It was his lost robot calling!

That fun concept, bridging the digital and physical, showed a cool way of using our API, which basically lets the user include any piece of HTML5 as a widget inside our interactive books. During the presentation someone even suggested a book using Google Earth to show a picture of your house in a horror story, and THEN the phone rings … Maybe too creepy?

If you have ideas for how you could use the API, please drop us a line and we’ll set you up with an early access user for free! 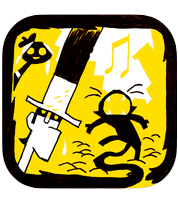 We are happy to launch our newest major feature; an API for developers wanting to combine the efficient production of rich interactive content in our visual online editor with custom development.

The API is already in practical use. One example is the title “Eg og Pontus går i land” where singer-songwriter Odd Nordstoga is singing his marvellous book (you can still read it yourself, if you prefer to!), illustrated by the excellent Rune Nyhus. You can see the title in action in the screenshot below. 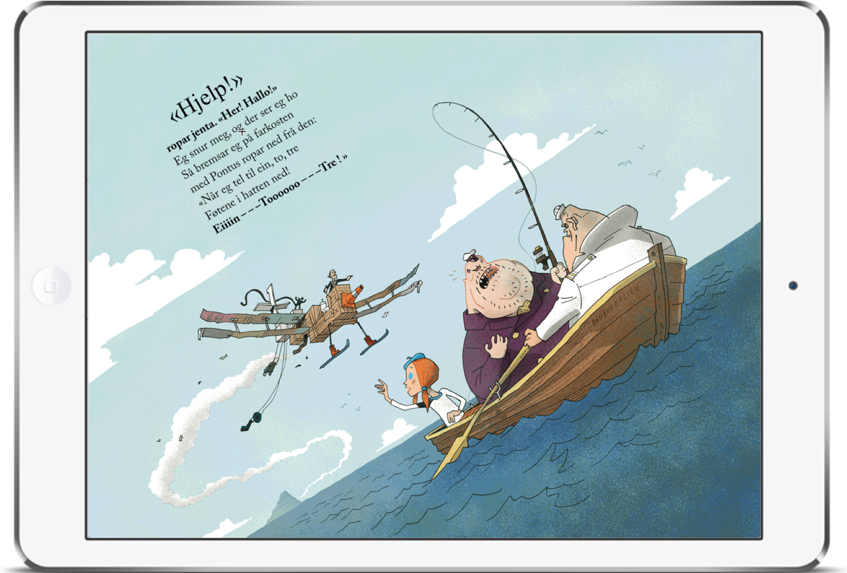 This book, with a completely custom menu, autoplay of pages, various animations and zoom effects, shows one way of using the API (mainly it is controlling timing and menu, the effects are actually created using standard tool features).

Other use cases include custom bookshelves beyond what you can already do directly in the visual tool, as well as creating a very rich custom-coded infographic as part of a tool-produced interactive book for e-learning. Two examples of the former use case are being released the coming week or so, in fact.

The API functions include (but are not limited to):

Do you see a missing feature or something you would like to add? Let us know!

Next week the API will be officially launched at a hackathon at Telenor. We are really looking forward to it. One of our ideas is to create apps helping refugees from Syria and neighbouring countries. It will be interesting to see what the hackers can come up with.

If you are following the the tech press, you might grow a bit tired of the term “Big Data”. Thus, I will not use it again in this short blog post. But the fact is we are now working hard to finalize the architecture for version 2 of our analytics platform (the first version dates back a few years and was tightly integrated into the authoring tool, this new one is running completely separately from the content production platform). This is an important part of an innovation project for which we have gotten some funding from Innovation Norway.

The most recent incarnation of Reading Analytics in TapBookAuthor.com goes way beyond the basic counting of titles and pages that the user accessed. Did the users really use the quiz on page 8? How about the video on the credits page – was it money well spent? Stop guessing and gain actionable insights to optimize your next titles, and learn in detail how your readers are spending their time by utilizing Reading Analytics.

Our Reading Analytics platform also allows for clients to plug in their own Business Intelligence platforms and feed data into production systems, if they desire. And opposed to old fashioned data warehouses (I avoided saying the B-word!), these can efficiently be queried and we provide a set of default real-time-updated widgets and reports as well.

If you want to join our beta program for our updated Reading Analytics platform or have some input for us, please contact us.